150,000 New Yorkers are living with chronic Hep C, which can cause severe liver disease if left undetected and untreated

“Hepatitis C is a silent epidemic that impacts 150,000 New Yorkers and deeply impacts the African American community. Though Hepatitis C can be treated and cured, many people with Hepatitis C have no symptoms, so it’s crucial to get tested and know your status,” said Stephane Howze, Vice President of Member Experience at Amida Care. “Events like today’s that raise awareness and encourage individuals to get tested, especially in the Bronx, where the rates of liver cancer are the highest in the city, are incredibly important, and we are thankful to our partners for their support.”

“Hep C is twice as prevalent among African Americans as it is among white persons, and two of the four neighborhoods with the highest rates of newly reported Hep C cases are right here in the Bronx. About half of the people with Hep C don’t even know they’re infected because they have no symptoms, which can take decades to appear. That’s why testing is so important,” said C. Virginia Fields, President and CEO of the National Black Leadership Commission on AIDS, Inc. 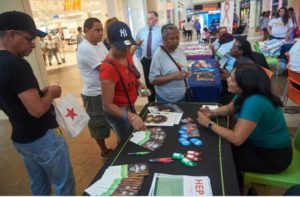 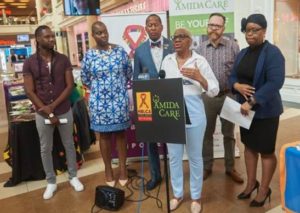 “Hep C is a silent epidemic that is affecting the African American community. We want to reaffirm our commitment to educate our brothers, our sisters, our fathers, our neighbors, anyone who is walking, living, and breathing to understand the importance of getting tested,” said Council Member Andy King, whose district includes the Mall at Bay Plaza, where the event was held.

“We know the work of this resource fair is very important. As others have said, Hepatitis C is a silent assault on the body. Symptoms can remain dormant for decades. Knowing your status allows you to get cured,” said Marricka Scott-McFadden, Deputy Bronx Borough President.

“As someone who has been cured of Hepatitis C, I want to encourage everyone to go out and get tested,” said Jackie Johnson, an Amida Care member and Bronx resident. “There is no reason to feel embarrassed or ashamed. If left untreated, this virus can lead to serious liver damage or even death. I’m living proof that treatment does work!”

“The more people who get treatment, the fewer new infections there will be. If there are fewer people out there with Hepatitis C, there will be fewer people exposed. We need to test and treat,” said Dr. Paul Chambliss of Acacia Network.

“We have a van outside doing testing today, so don’t leave for tomorrow what you can do today,” said Bishop Nancy Rosario, Church of God’s Children. “My brother over ten years ago passed away from Hepatitis C. There was no cure then; there is a cure now, so please get tested!”

“A quarter of Americans living with HIV also have Hepatitis C, and liver damage progresses more rapidly in those who are co-infected,” said Terry Leach, Vice President of Pharmacy for Amida Care. “New treatments are incredibly effective and have minimal side effects. At Amida Care we’ve treated over 1,200 members for Hepatitis C, with a 95% cure rate. Knowing your status means you can begin to get the treatment you need immediately, making events like today’s so critical.”

Over 3.5 million Americans are living with Hepatitis C. Hepatitis C can cause serious liver damage, and the Bronx has the highest liver cancer and mortality rate of any NYC borough. Thankfully, there is a cure, so it’s crucial that those at risk for Hepatitis C are screened so they can begin treatment immediately.

Amida Care Inc. is a not-for-profit health plan that specializes in providing comprehensive health coverage and coordinated care to New Yorkers with chronic conditions, including HIV and behavioral health disorders, and people who are of transgender experience or homeless (regardless of HIV status). Amida Care has a wide network of health care providers throughout New York City and is the largest Medicaid Special Needs Health Plan (SNP) in New York State. For more information, visit www.amidacareny.org.

The National Black Leadership Commission on AIDS, Inc., (NBLCA) is a 501c3, not for profit organization with a mission to educate, mobilize, and empower Black leaders to meet the challenge of fighting HIV/AIDS and other health disparities in their local communities. Founded in 1987, and headquartered in New York City, NBLCA is the largest nonprofit organization of its kind in the United States.