More than 200,000 Rohingya refugees are at risk of landslides and floods during the current monsoon season, according to the United Nations. Over the past five weeks, more than 28,000 people have been affected as 133 landslides have damaged more than 3,000 shelters.

“The Rohingya refugees languishing in the overcrowded and threadbare camps in Cox’s Bazar are in urgent need of international assistance. A mere fifth of the United Nation’s appeal has been committed so far. The world cannot stand by while Bangladesh is left to shoulder the responsibility alone,” said Biraj Patnaik, Amnesty International’s South Asia Director.

The assistance is needed to provide for the Rohingya’s most basic needs in the camps, including access to adequate housing. Almost all of the shelters are currently composed of flimsy bamboo and tarpaulin, many of them perched precariously on mud hills. The Bangladesh government has imposed restrictions on building more permanent structures within the refugee camps.

In anticipation of the extreme weather, these settlements have merely been reinforced with further layers of bamboo and tarpaulin. While humanitarian workers have mounted operations to repair damaged settlements, the camps stretch over such an expanse that they cannot reach everyone. In almost all of the camps, there are no durable settlements, leaving them vulnerable to further weather events.

The camps are also extremely congested. The area where most of the Rohingya refugees have taken shelter is large enough to count as Bangladesh’s fourth largest city, with nearly a million people, including the local host community.

At its most dense, the camps have 95,000 people per square kilometre – surpassing the population density of any city in the world. And the camp population consists of 80% women and children.

The United Nations’ refugee agency has warned that “given the scope of the refugee population, the sheer size of the settlements and the challenging terrain, we fear that the extreme weather will cause further damage, destruction and potential loss of life.”

To avert further disaster, the refugees will have to be relocated to less congested areas on flat land – something that will also mitigate security and medical risks. 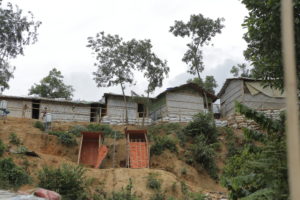 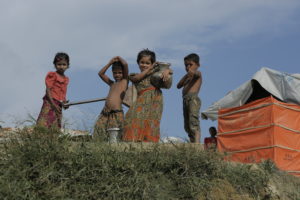 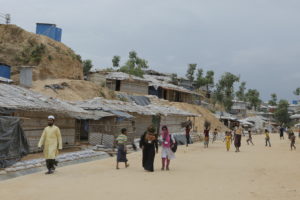 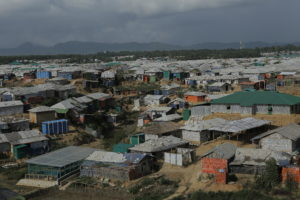 While many Rohingya refugees have expressed a desire to return to their homes in northern Rakhine State, the prospect of them being able to do so under dignified, safe and voluntary conditions in the near future remains remote.

Until they can return to Myanmar without the risk of serious human rights violations, the refugee response will have to shift from one that has been near-exclusively focused on a humanitarian crisis response to one that meets the refugees’ needs for protection, including safe and sustainable living conditions.

With the camp population segregated from the local host community, there are limited education opportunities for the children, who make up more than half the refugee population. Since being driven out of their villages by the Myanmar military’s crimes against humanity, they have already lost a full school year and are not able to attend formal schools in Bangladesh.

Another concern is the right to work and the opportunity to become self-sustaining. Their ability to find work is limited by restrictions on freedom of movement within Bangladesh, with refugees required to remain within designated areas.

To be able to mount an effective and sustainable response to the refugee situation in Cox’s Bazar, the children need to have access to education and the adult population needs to be have the right to freedom of movement and the right to work.

“This is not a crisis that is going to disappear any time soon. We need to confront the fact that the Rohingya may have to remain in Bangladesh for years to come. The international community has a duty to support these victims of the most horrific human rights violations accordingly, and not wait until further disasters visit them before taking action,” said Biraj Patnaik.

Camfed Announces New Board Chair in the US