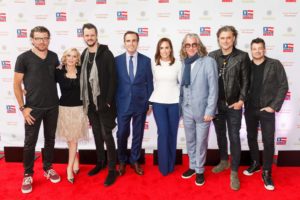 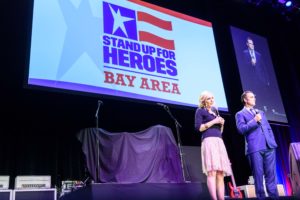 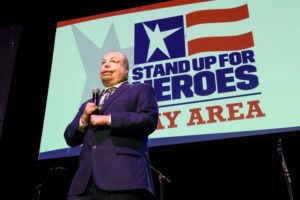 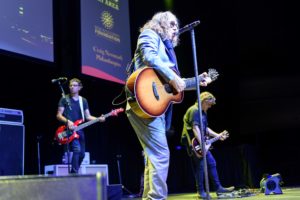 Press Release – SAN FRANCISCO, May 18, 2018 — The first-ever Stand Up for Heroes: Bay Area delivered on its promise to be a night of inspiration and first-class entertainment—with a few surprises— for Bay Area residents who came together to raise funds for programs benefiting wounded veterans and their families.

Presented by the Bob Woodruff Foundation, the benefit featured wounded veteran speakers who shared their stories of recovery and resilience before turning the show over to comedians Dave Attell, Donnell Rawlings and Jeff Ross. The audience had a surprise performer in comedian and actor George Lopez who took the stage, while musical guest Collective Soul closed out the incredible show.

“We are extremely grateful for the generosity and commitment of all who attended Stand Up for Heroes to support those who have bravely served our country,” said Bob Woodruff, ABC News correspondent and co-founder of the Bob Woodruff Foundation. “This night brought people together and showed how much we appreciate the incredible sacrifices these individuals, and their families, have made.”

The Bob Woodruff Foundation was cofounded in 2006 by Bob Woodruff and his family after he sustained serious injuries while covering the Iraq War. The foundation has since become a leader in the veteran community, investing in programs that have touched the lives of veterans and family members across the country. Woodruff began his media career in San Franciso, following the 1989 earthquake and after working as an attorney.

The foundation brought the event to San Francisco to engage and unite local business, tech and philanthropic leaders in the work of the foundation.

“The Bay Area has a rich military history and there is incredible potential to foster collaboration within such a dynamic community of change makers,” said Anne Marie Dougherty, executive director of the Bob Woodruff Foundation. “We see a unique opportunity to complement, accelerate and amplify the great work that’s already being done on behalf of the veteran community.”

SUFH was created in New York 11 years ago by Woodruff, his wife Lee, and New York Comedy Festival founders Caroline Hirsch and Andrew Fox. Since its inception, the event has raised more than $45 million to find, fund and shape the most innovative programs serving post-9/11 impacted veterans, service members and their families.

Thanks to a generous matching gift challenge issued at the event, all funds donated to the Bob Woodruff Foundation, by midnight Pacific Time, will be doubled—up to $200,000.

Stand Up for Heroes returns to the Hulu Theater at Madison Square Garden, New York, Nov. 5.

To make a donation or learn more about the Bob Woodruff Foundation, please visit www.bobwoodrufffoundation.org.

ABOUT STAND UP FOR HEROES

Stand Up for Heroes launched in 2007 as the brainchild of Bob and Lee Woodruff, and New York Comedy Festival founders, Caroline Hirsch and Andrew Fox, and is one of New York’s most anticipated nights of hope, healing and laughter, honoring our nation’s injured veterans and their families. Since its inception in 2007, SUFH has raised more than $45 million to create long-lasting, positive outcomes for our nation’s injured veterans, service members and their families. Stand Up for Heroes continues to expand and grow due to its remarkable success. Beginning at Town Hall, the event moved to the Beacon Theater in 2010, and to the Theater at Madison Square Garden in 2013. Over the past eleven years, comedians and performers including Chris Botti, Stephen Colbert, Jim Gaffigan, Ricky Gervais, John Mayer, Seth Meyers, Conan O’Brien, Phillip Phillips, Brian Regan, Ray Romano, the Red Hot Chili Peppers, Jerry Seinfeld, Bruce Springsteen, Jon Stewart and Robin Williams have taken the stage to advocate for extraordinary service members.

ABOUT THE BOB WOODRUFF FOUNDATION

The Bob Woodruff Foundation (BWF) was founded in 2006 after reporter Bob Woodruff was hit by a roadside bomb while covering the war in Iraq. Since then, the Bob Woodruff Foundation has led an enduring call to action for people to stand up for heroes and meet the emerging and long term-needs of today’s veterans. To date, BWF has invested more than $55 million to find, fund and shape programs that have empowered impacted veterans, service members and their families, across the nation. For more information, please visit bobwoodrufffoundation.org or follow us on Twitter at @Stand4Heroes.