“When we invest in scholars studying abroad, we are investing in humanity itself.” 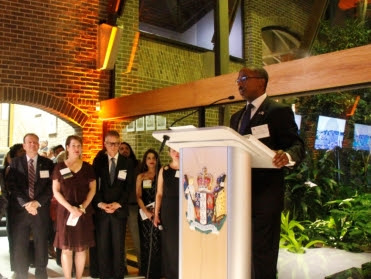 Ambassador Reuben E. Brigety II, dean of the GWU Elliott School of International Affairs, receiving the Fritz Kaufmann Champion Award at the Fund for Education Abroad Scholar Gala, shares his beliefs that investing in study abroad is investing in humanity itself.

An impassioned advocate of study abroad for its ability to advance humanitarian causes, Ambassador Brigety has led a career of service in academia, diplomacy and the military. His areas of focus includes U.S. foreign policy in southern Africa, security in sub-Saharan Africa, U.S. refugee programs in Africa, humanitarian partnerships, international relations, human rights, and humanitarian assistance.

“When we invest in scholars studying abroad, we are investing in the multiplicity of impacts they will have. We are investing in humanity itself,” Ambassador Brigety told the crowd of FEA supporters gathered at the Annual Scholar Gala where the award was presented.

A native of Jacksonville, Florida, he also previously served as Director of the Sustainable Security Program at the Center for American Progress, a Special Assistant in the Bureau for Democracy, Conflict, and Humanitarian Assistance at the U.S. Agency for International Development, and as a senior advisor for Development and Security to the U.S. Central Command Assessment Team in Washington and in Doha, Qatar.

Prior to his work in the policy arena, Ambassador Brigety served as an assistant professor of government and politics at George Mason University and at the School of International Service at American University. In addition, he was a researcher with the Arms Division of Human Rights Watch (HRW), where he conducted research missions in Afghanistan and Iraq. Before joining HRW, Ambassador Brigety was an active duty U.S. naval officer and held several staff positions in the Pentagon and in fleet support units.

Addressing the many FEA scholars in attendance at the gala, Ambassador Brigety applauded their choice to study abroad and encouraged them to share their newfound outlooks and to help make the opportunity possible for others: “Let me assure you in your soul, you have made the right choice. It’s an investment. It’s up to you to make that investment grow and multiply to make that investment reach the next generation.”

Ambassador Brigety is a 1995 distinguished midshipman graduate of the U.S. Naval Academy, where he earned a B.S. in political science (with merit), served as the Brigade Commander and received the Thomas G. Pownall Scholarship. He also holds an M.Phil. and a Ph.D. in international relations from the University of Cambridge, England. Ambassador Brigety is a member of the International Institute for Strategic Studies, a Life Member of the Council on Foreign Relations, and a recipient of the Council’s International Affairs Fellowship. He has served on the Board of Directors of the Atlantic Council and currently serves on the Board of Trustees of The Carter Center.

The Fritz Kaufmann Champion award honors the legacy of Fritz Kaufmann. A lawyer by training, journalist and professor of economics, Professor Kaufmann left his native Vienna in 1942 and later embarked on a three-month tour of Europe to evaluate the political and economic effects of the Marshall Plan. His personal experience of war and witnessing its devastating effect inspired a lifelong devotion to advancing cross-cultural understanding through international educational travel, multicultural awareness and language training, leading to the founding of the Association of Academic Travel Abroad in 1949.

Changing the face of study abroad programs to better reflect the rich diversity of our nation, FEA awards substantial, game-changing scholarships, helping student groups underrepresented in study abroad and those destined for non-traditional locations expand their horizons, enrich their education and, in turn, change the world. A total of 290 scholars have benefited from over $1.3 million in scholarships granted since FEA’s inception in 2010. FEA scholars include minorities, first-generation college students, community college students and older students returning to college mid-career.