Home » Environment » How Fast Is Too Fast? Population Declines Of Mammals And Birds Linked To Rapid Warming Of Climate
Environment

How Fast Is Too Fast? Population Declines Of Mammals And Birds Linked To Rapid Warming Of Climate 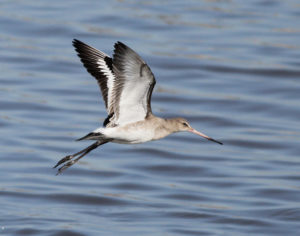 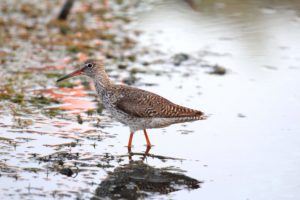 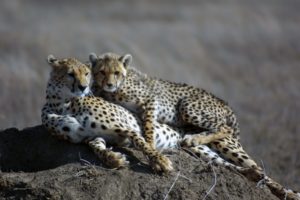 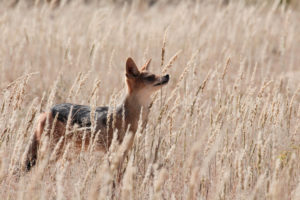 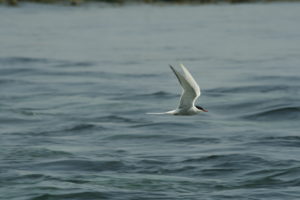 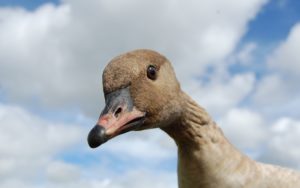 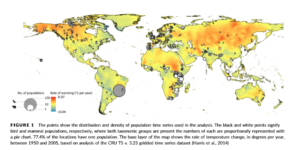 Press Release – THE RATE at which our planet is warming has been found to be a critical factor in explaining the decline of bird and mammal species, reveals new research published today in Global Change Biology by international conservation charity ZSL’s (Zoological Society of London) Institute of Zoology.

Scientists studied 987 populations of 481 species across the globe, to investigate how the rate of climate change and land-use change (from natural to human-dominated landscapes) interact to affect the rate of decline on mammals and birds, as well as whether species located in protected areas and body size had an influence. The rate at which our climate is warming was found to be the best explanation for the observed rate of population declines.

Birds were one of the worst affected by rapid climate warming, with effects being twice as strong in birds over mammals, as well as populations located outside of protected areas being more severely impacted. Species such as the black-tailed godwit (Limosa limosa) in Germany and Senegal, pink-footed Geese in Canada (Anser brachyrhynchus) and black-backed jackal (Canis mesomelas) in Tanzania were just some of the species highlighted to be in population decline.

Lead-author, Fiona Spooner from the Institute of Zoology and UCL’s Centre of Biodiversity and Environment Research said: “The reason we think birds might be worse off in particular is due to birds breeding seasons being particularly sensitive to temperature changes. We think this could be leading to a desynchronisation of their reproduction cycle, leading to the negative impacts we’re seeing. Mammal breeding seasons are a lot more flexible, and this is reflected in the data.”

This finding is crucial, because if the rate at which the climate warms, exceeds the maximum possible rate of animals being able to adapt to the changes in their environment – local extinctions of animals will start to become more prominent. The research stresses the urgency of understanding the vulnerability of animals to temperature increases and provides a snapshot of what may come to pass if we don’t slow down climate change.

Senior co-author, Dr Robin Freeman head of the Indicators and Assessment Unit at ZSL’s Institute of Zoology said: “Our research shows that in areas where the rate of climate warming is worse, we see more rapid bird and mammal population declines. Unless we can find ways to reduce future warming, we can expect these declines to be much worse”.

“Importantly, our finding does not suggest that human land-use changes, such as for agriculture, development or deforestation do not play a role in the decline of birds and mammals, or that because the decline is climate change related, it’s somehow something for future generations to deal with. Rather, this finding suggests that additional data including higher resolution landscape data is needed to understand the mechanisms driving these declines”.

Gareth Redmond-King, Head of Climate and Energy Policy at WWF said: “This report provides further evidence of the growing threat that climate change poses to our wildlife, not only around the world but also right here on our doorsteps such as bees and the much-loved puffin.

“That’s why we urgently need the UK Government to take action to meet current targets to cut greenhouse gas emissions, but also to increase ambition to build a sustainable, climate-resilient future in which we restore nature, not destroy it”.

For more information on the work of ZSL’s Indicators and Assessments Unit. The department publishes the Living Planet Index Report alongside WWF every two years. This paper provides a snapshot into the exciting work that will published come October 2018. Find out more here: https://www.zsl.org/global-biodiversity-monitoring/indicators-and-assessments-unit/living-planet-index

Lin-Manuel Miranda, His Family, And Hamilton To Create An Arts Fund For Puerto Rico With Flamboyan Foundation

Spiritual Eco-Feminism: A Radical Approach to Post-Lineage Yoga for Women During These Times