One step closer to Turning Type 1 to Type None. 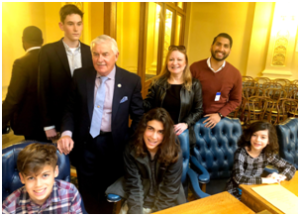 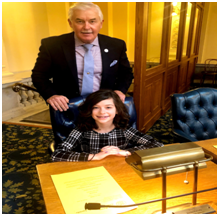 Press Release – Ocean Township A joint resolution,brought forth by Assembly Members Eric Houghtaling and Joann Downey, to designate the Monday before Thanksgiving as “A Day in the Life – Type 1 Diabetes Day” was approved Monday, October 29.

JDRF is honored to announce that starting this year, the Monday before Thanksgiving will be known as “A Day in the Life – Type 1 Diabetes Day” in New Jersey. A full vote took place at the state legislator and the resolution passed this Monday, October 29. The joint resolution (AJR152) asks the Governor to annually issue a proclamation recognizing the Monday before Thanksgiving Day as “A Day in the Life – Type 1 Diabetes Day,” and calls upon public officials and the citizens of New Jersey to observe the month and to draw attention to Type 1 Diabetes (T1D), how it differentiates from Type 2, and rally support for the T1D community.

Assemblyman Houghtaling and Downey wanted to recognize the work done by JDRF following the OneWalk at Avon-by-the-Sea in 2017 that raised over $500,000 in the fight to end type 1 diabetes.

Assemblyman Houghtaling met nine-year-old Isa Rosa. “I was talking to the Assemblyman and I explained that I prick my finger every day and wear an insulin pump and continuous glucose monitor to stay alive,” said Rosa. She went on to explain that she must inject herself with insulin before every meal because her body has stopped producing insulin on its own. Most people living with T1D prick their fingers at least 6 times a day to measure and regulate their blood glucose levels.

Moved by Isa’s strength, Houghtaling and Downey invited JDRF chapter members to the local Assembly office, where many families living with T1D were able to connect and talk about the struggles that they, or the person they care for, face during their day-to-day. Lawmakers joined the conversation, asking questions about the difference between Type 1 and Type 2 diabetes, and ultimately leading to this historic day.

“Diabetes impacts a significant proportion of New Jersey’s population, with approximately 11 percent of our adult population diagnosed […]” said Assemblyman Eric Houghtaling. “With so many of our residents impacted by this disease, it is important that we do our part to raise awareness of type 1 diabetes and establish a supportive community upon which New Jerseyans living with diabetes can rely.”

“There are good days and bad days, and most people don’t understand [or] know what JDRF does for these families, for these communities, and the support that is provided,” said JDRF Advocacy Chairwoman Barbara Feinstein. The designation of this day, hopefully, will leave fewer newly diagnosed children and adults feeling alone and let more people know that resources like JDRF are ready to help.

JDRF is honored to have the support of Assemblyman Houghtaling and Downey and is humbled to be a part of this momentous vote.