The study will be conducted at numerous sites around the world with enrollment beginning in Brazil this summer at Heminio Ometto University Center, Araras, Brazil and Division of Periodontics, College of Dentistry, State University of São Paulo, Brazil. The study will include arms with bioelectric stimulation and braces and an arm with bioelectric stimulation in clear aligners.

OrthodontiCell is a startup incubating at Leonhardt’s Launchpads Utah, Inc. in Salt Lake City, Utah with funding, technical and advisory support from Leonhardt Ventures and Leonhardt’s Launchpads by Cal-X Stars Business Accelerator, Inc. and DentaCell Accelerator. Leonhardt Ventures and its team has been developing leading cardiovascular devices since the 1980’s and Dr. Shinich Kanno a collaborating researcher published the first bioelectric VEGF protein expression paper in CIRCULATION in 1999. This led to an issued pioneering patent on bioelectric VEGF expression a few years later filed by the Leonhardt team. From 1999 forward the Leonhardt team has patented, developed and tested numerous bioelectric stimulation devices, signals and sequences for various healing applications. Howard Leonhardt founding member has 21 issued U.S. patents with over 100 invention claims and dozens of new patent claims pending currently with the USPTO. Dr. Jorge Genovese of Argentina and Dr. John Marchetto are co-inventors along with Leonhardt of the OrthodontiCell device line. In April of 2016 they began filing their first series of patent applications specific to bioelectric accelerated tooth movement and stabilization keyed on RANKL, VEGF and OPG in combination. 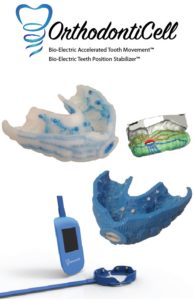 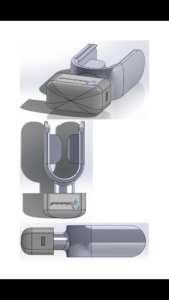 OrthodontiCell began preliminary testing of prototypes in November 2015 and has completed a series of bioelectric protein expression safety and efficacy studies in Argentina, Utah and more recently at Forsyth Institute in Boston in preparation for these clinical trials focused on the bioelectric stimulation controlled release of RANKL and VEGF for accelerated tooth movement and OPG for stabilization. Previous studies were completed using gene transfer and protein deliveries of the RANKL and OPG that demonstrated a 2/3rds improvement in tooth movement acceleration and teeth position stabilization after straightening – https://www.ncbi.nlm.nih.gov/pubmed/16397507. The OrthodontiCell team demonstrated in pre-clinical studies their ability to produce the same volume of RANKL and OPG produced in these previous successful gene and protein studies via bioelectric stimulation with only 2 to 20 minutes stimulation time via a customized proprietary mouthpiece and stimulator 2X a week.

“Our team demonstrated safety and > 30% acceleration of tooth movement with our previous published pre-clinical study focused on TGF-B1, VEGF and bFGF expression controlled by electrical stimulation. The OrthodontiCell team now brings to the table the added bioelectric signal sequences for RANKL and OPG. Numerous studies have documented the strong influence of RANKL in accelerated tooth movement. The addition of OPG for position stabilization is also a potential major advancement. We look forward to implementing well controlled studies to prove out the safety and efficacy of this new combination technology platform.” states Dr. Mauro P Santamaria of the University of Sao Paulo, College of Dentistry and Peridontics and Henminio Ometto University Center, Araras, Brazil and his collaborator Dr. Milton Santamaria Jr.

“Over 100 papers have demonstrated the safety, healing and pain relief properties of electrical stimulation since the 1950’s. What is unique about this new OrthodontiCell technology is precision high quality signals in precise sequences to control with accuracy the release of RANKL, VEGF and OPG proteins from a patient’s own surrounding tissues on demand. This platform differs from others in the precise control of these key tooth movement proteins and is the only technology known that follows up the accelerated tooth movement with stabilization to reduce, or possibly even the eliminate, the need for long term retainer use. Our goal in this study is to demonstrate both a 2/3rds improvement of tooth movement acceleration compared to braces and aligners alone and to document for the first time improved stabilization after tooth movement”. stated Dr. John Marchetto, Orthodontist, Co-Inventor and President and Chief Medical Officer of OrthodontiCell.

OrthodontiCell is an orthodontic accessory intended for use during orthodontic treatment. The device is intended to be used in conjunction with standard orthodontic appliance, such as braces and aligners.

OrthodontiCell has Booth No. 1148 at the American Association of Orthodontists Annual Meeting in Washington D.C. May 4th to 8th, 2018 and will have prototypes on display and a video demonstrating our technology platform. Click here to register to attend – https://register.xpressreg.net/EventRegistration/AAOS0518/Register/Landing/65fcb7e5-989c-43e8-9a53-f8b76104e97b

“We hope to prove in these studies we can help patients quality of life by reducing their time to wear uncomfortable braces, aligners and retainers. Our bioengineering teams in Utah and California and our research collaborators in Argentina, Brazil, Florida and Boston MA have all worked hard to develop and test a reliable product leading into these clinical trials.” stated Howard Leonhardt, Co-Inventor, Executive Chairman and CEO OrthodontiCell and Leonhardt’s Launchpads.

“Our pre-clinical animal studies have demonstrated our ability to repeatedly and reliably increase the expression of RANKL, VEGF and OPG in stimulated tissues and bone on demand.” stated Dr. Brett Burton, Director of R&D at Leonhardt’s Launchpads Utah, Inc. and OrthodontiCell.

“What makes this technology different than previous light, vibrational and electrical stimulation treatment products is the precise control of specific protein expressions at specific times as required. The OrthodontiCell bioengineering team has developed unique bioelectric signal sequences and working with technology partners high precision signaling which enables this platform.” added Alex Richardson VP of Engineering and Product Development at OrthodontiCell.

“I have been involved with over 80 clinical trials over my career and this one I can say is designed with sound science and diligence to attempt to prove out both the safety and efficacy of this product. We look forward to sharing interim results sometime later this year or early next year.” stated Dr. Leslie Miller, Chief Medical and Clinical Affairs Officer for Leonhardt’s Launchpads and OrthodontiCell.

Launched in November 2015 in Salt Lake City in the Leonhardt’s Launchpads Utah, Inc. innovation and startup accelerator within DentaCell Accelerator in Los Angeles OrthodontiCell is focused on the development of bioelectric stimulation devices for accelerated tooth movement and stabilization. The team has completed 2.5 years of development and preparation pre-clinical testing in advance of entering controlled clinical trials planned to launch OUS the summer of 2018. See web site www.orthodonticell.com

Forward Looking Statements and Cautionary Statement: This technology is not yet proven safe or effective in properly controlled statistically significant clinical trials. Patents pending may not be issued. Patent licenses may not be kept current. The OrthodontiCell startup is underfunded and understaffed compared to comparative competitive companies in its sector. It may not have sufficient resources to see through all obligations necessary to move this product to FDA market clearance, CE Mark and full commercial clearances. The product may not compel sufficient reimbursement from insurance or Medicare to cover costs. Personnel and collaborative partners employed by and partnered with OrthodontiCell may not remain engaged through the course of this development and any changes may delay the development. There may be side effects found from the product use that were not previously detected in pre-clinical studies. The results in clinical trials may vary from previous pre-clincials studies. OrthodontiCell relies on a number of suppliers that may not perform as needed for a successful product launch. This is an early stage high risk product development which is not yet proven.

How to Choose a Smartwatch

The Best Gadgets Are on Their Way to the Market