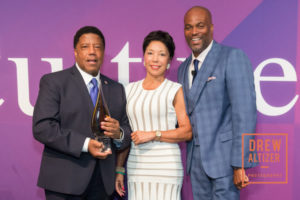 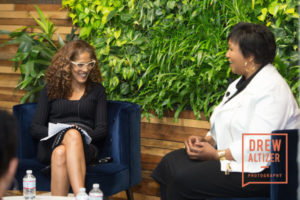 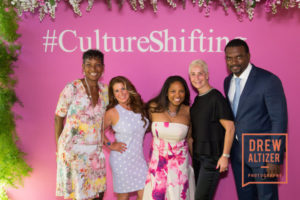 “We aim to close the racial divide in Silicon Valley and Culture Shifting Weekend is a firm step towards that goal,” said Andrea Hoffman. “People often say to me, ‘Where are the people of color who can lead America’s best companies?’ The answer is they’re right here—hiding in plain sight. We’ve built a 5,000 person network that is leadership and board ready, that include top subject matter experts and investors who want to be in the room because of the business deals and business opportunities they access.”

The Culture Shifting Awards recognize leaders and pioneers of diversity and those who care about growth and innovation through diversity and inclusion. This year actor/producer/comedian Chris Spencer emceed the program honoring Peggy Abkemier Alford, CFO of the Chan Zuckerberg Initiative; Ime Archibong, VP of Partnerships, Facebook; Lloyd Dean, CEO of Dignity Health; and Denise Young Smith, Executive in Residence at Cornell Tech. The Culture Shifting Awards has honored more than 40 leaders to date that span technology, innovation and social impact.

A special appearance was made by 7-year old aspiring neuroscientist Amoy Antunet whose goal is to perform the first brain transplant. At the Culture Shifting Awards she had the opportunity to be on stage with actress Nichelle Nichols who played communications officer Lieutenant (later Commander) Uhura, aboard the USS Enterprise in the Star Trek TV series.

A complete list of distinguished hosts, speakers and sponsors may be found here.

“Culture Shifting Weekend presented a unique opportunity to network not only with entrepreneurs of color, but also with high profile investors and critical corporate partners who are dedicated to realizing the commercial impact of inclusive innovation and broadening the investment and acceleration pipeline for all entrepreneurs.” Alice S. Vilma, Managing Director, Morgan Stanley, Multicultural Client Strategy

“Attending the Culture Shifting Weekend Millennial Breakfast afforded me the opportunity to develop relationships with the future face of global business through what can only be described as the most incredible event I have ever been involved with,” said Landon Edmond, Cloud General Counsel, SAP. “Andrea and team are actively shifting culture. I cannot wait until next year’s event!”

“Culture Shifting Weekend was inspiring,” said Juanita Lott, Angel Investor. “The relationships and partnerships that come from the work of Culture Shift Labs will play an important role in advancing the great leaders and future leaders that will work to make this culture shift a reality.”

Andrea Hoffman is an advisor, dealmaker, strategist, 2x author, and the founder and CEO of the management consulting firm Culture Shift Labs (CSL). CSL advises senior leaders, cities, large nonprofits and philanthropists on growth and innovation through diversity and inclusion. Andrea consults with C-suite executives across a wide range of industries on finding new growth opportunities. CSL has offices in New Jersey and San Francisco (where she expanded the business in 2015).

Andrea is also the founder of Culture Shifting Weekends, the largest bi-coastal annual gathering of Black leaders in technology, innovation and social impact to enable deals and collaborations (think Davos but for Black decision makers). She’s been producing this gathering of her knowledge and network for 9 years in NYC and 4 years in Silicon Valley. In addition, Andrea is developing SaaS platform called Katapult, which will help companies with 1,000+ employees assess, measure and improve their diversity efforts including impact on business and society.

How to Choose a Smartwatch

The Best Gadgets Are on Their Way to the Market