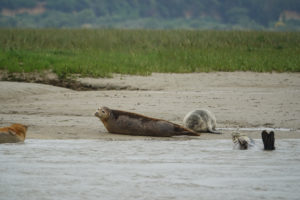 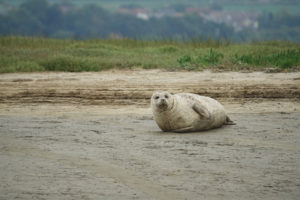 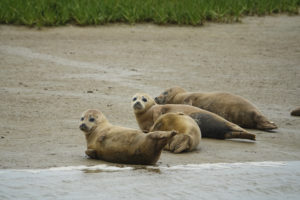 Press Release – Marine biologists will be keeping their eyes peeled for new arrivals as the first-ever survey of seal pups in the Thames Estuary ‘swims’ into action via sea, land and air this coming weekend.

Led by international conservation charity ZSL (Zoological Society of London), this year’s study – running from 1-4 July – will for the first time count seal pup numbers in key colonies along the Kent and Essex coasts, shedding further light on the importance of this critical habitat for the UK’s native harbour seals (Phoca vitulina).

Conducted via a combination of aerial, shoreline and boat-based surveys, the inaugural harbour seal breeding survey will also look for impacts of a range of emerging threats to these animals – ranging from wildlife disease and pressures from coastal construction projects, to plastic pollution and inter-species competition for food/habitat.

“Last year, we estimated populations of 1,104 harbour seals and 2,406 grey seals across the Estuary – an increase of 14% and 19% respectively against 2016’s figures. These positive findings support the idea that today’s Thames is not the same polluted, biologically dead ‘open sewer’ it was in the 1950s, but is in fact thriving with wildlife once again. There’s still a lot of work to do, however, so launching our first-ever pupping count this year should yield further invaluable evidence to support the ongoing renaissance of London’s river as a living, breathing ecosystem.”

For more information on ZSL’s ongoing work in the River Thames, including the opportunity to sign-up as a ‘citizen science’ conservation volunteer, please visit: https://www.zsl.org/regions/uk-europe/thames-conservation

ZSL’s work to conserve wildlife in the River Thames is supported by partners including Tideway – the company building London’s new ‘super sewer’.