Press Release – December 18, 2017 — Virginia Tech has received its largest-ever gift to athletics and the single-largest outright gift ever given to the university.

The gift will benefit student-athletes in all 22 intercollegiate sports. It was made by an alumni couple who are Virginia natives.

This visionary and transformational gift will create a new Student-Athlete Performance Center that will include significant expansion and innovative renovation, encompassing the entire fourth floor of the Jamerson Athletic Center.

“This is a significant step forward that will help Virginia Tech meet the competitive challenge of athletics by developing the resources we need to support the remarkable talent and leadership in our athletic department,” Sands said.

“This generous gift will greatly enhance the recruiting and experience of our student athletes. We deeply appreciate these two alumni friends and their expression of confidence in the University and our athletic program under Whit Babcock,” Sands said. “It is this kind of Hokie spirit that brings Justin Fuente and Buzz Williams, as well as other talented head coaches and student-athletes to Virginia Tech. This is an extraordinary moment in time to move forward and whether it’s a noteworthy gift, joining the Hokie Club’s Drive for 25, or making an annual contribution, everyone’s participation will make a difference. There is great strength in numbers and we hope all Hokies will answer the call to support Virginia Tech.”

The gift will allow work to begin on what is estimated to be a $16.5 million project. New construction and renovation on the 17,000-square-foot center is anticipated to start in 2018, pending formal approval by the Virginia Tech Board of Visitors. 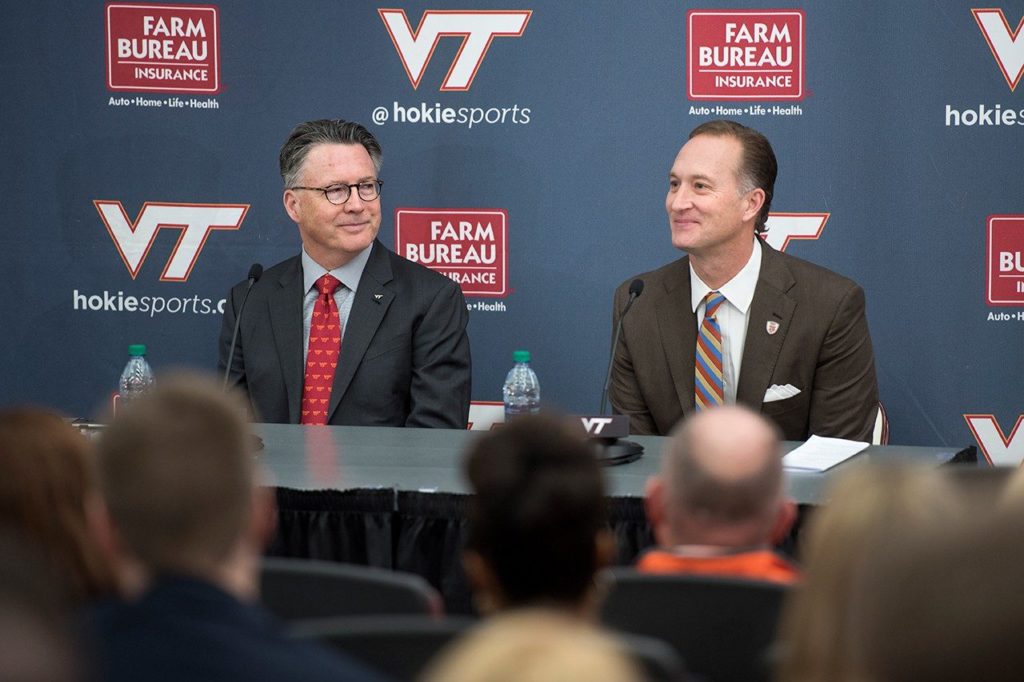 “We are so very thankful for this transformational gift,” Director of Athletics Whit Babcock said. “We will absolutely be excellent stewards of this generosity. These alumni certainly embody the spirit of Ut Prosim (That I May Serve) that we hold so near and dear to our hearts at Virginia Tech. They share a deep affinity for this place and our students, including our 579 student-athletes. We’re extremely grateful for their continued support of Tech, and especially this generous contribution that will benefit each and every one of our 22 sports for years to come.”

Babcock indicated that conceptual plans for the new project have moved to the formal design process with further renderings to be released. When completed, the center will feature panoramic views of Lane Stadium and a balcony overlooking the practice field. The fourth floor of Jamerson will more than double from its current 6,000-square-foot footprint to 17,000 square feet. Space for dining, nutrition, donor hospitality, recruiting areas and a seamless connection to the Cassell Coliseum concourse will be part of the new addition.

“These upgrades will enable us to utilize this space 300 times a year rather than 50,” Babcock said. “It makes a huge statement to our commitment and vision to be the preeminent program in the ACC.”

The gift also sets aside a maintenance fund to keep the new space up-to-date and visually appealing for years to come.

This announcement comes at the end of an extraordinary calendar year of giving to Virginia Tech. In April, Sands announced that more than $25 million had been raised toward the Intelligent Infrastructure and Construction Complex, a key project in one of the university’s Destination Areas of strategic focus. That month also saw the Hokie Club announce it had passed $30 million in total giving for the first time. In August, the university announced that it had raised a record $162.28 million in new gifts and commitments during the 2017 fiscal year. Later that month, 137 new students arrived on campus as the first beneficiaries of a Beyond Boundaries Scholars program fueled by nearly four dozen donors. In September, Virginia Tech announced its largest ever scholarship gift, $15 million from the A. James & Alice B. Clark Foundation.

“Record-setting giving doesn’t happen unless people are inspired by the direction that’s being set by university leaders,” said Charlie Phlegar, the university’s vice president for advancement. “The extraordinary generosity we’ve seen this year shows just how excited our alumni and friends are by the impact that Tim Sands and Whit Babcock are making on Virginia Tech.”

“Every day I’m reminded that Virginia Tech is truly a special place,” Tech football coach Justin Fuente commented. “I don’t have the words to express the heartfelt gratitude that I have for these incredibly thoughtful benefactors. I’m beyond excited about how all our sports and our student-athletes will benefit from the Student-Athlete Performance Center.

“Yes, this will make a tangible impact on recruiting the best and brightest talent to Virginia Tech,” Fuente continued. “Yes, the enhancement of our sports nutrition program will help all our sports at Tech. But most importantly, this gift exemplifies the true spirit of Virginia Tech. We have a couple who not only want the Hokies to compete at the highest level sooner than later, but we also have a shining example that will hopefully move others to make an impact on the lives of Hokies for years to come.”

“Our role as coaches is to make a difference in the lives of our student-athletes,” men’s basketball coach Buzz Williams added. “The couple who made this donation may not have the title of ‘coaches,’ but their incredibly generous gift will make an extraordinary impact on countless student-athletes in all of our sports. I can’t thank the donors enough for their commitment to the well-being of our young men and women who represent Virginia Tech. Their belief and commitment to giving back to Virginia Tech demonstrates that they want to make a profound impact on our success, our student-athletes’ success. Our entire university is profoundly grateful.”