d.light is the global market leader in distributed solar power and has so far powered more than 75 million lives mostly in the developing world.

The company today celebrated the decade of providing safe, clean and affordable light to its customers at its Africa headquarters in Nairobi. d.light also unveiled the latest edition in its innovative line of solar products at the event.

“Our customers will now have access to information, entertainment, education, more business hours and, mobile charging and better lighting conditions in the house,” said Sam Goldman, co-founder and Chief Product Officer of d.light.

The X850 has also been described as an “aspirational product” that grows and morphs according to consumer needs, powering multiple lights, mobile phones, heavy-duty electronic appliances and other accessories.

A key feature of the X850 package is a d.light 19” LED High Definition digital TV, the company’s first foray into the TV market which recently won the Global LEAP award for “the world’s most efficient TV in its class.”

d.light is also planning a major upgrade across its entire solar lantern products in the next few weeks, in line with its mission of moving its customers up the energy access ladder.

The X850 marks a significant milestone for d.light, which today celebrated 10 years since its founding in 2007 by Ned Tozun and Sam Goldman.

In its decade of operation, d.light has affordably powered more than 75 million lives including 19 million school-aged children who can now read and do their homework under light that is good for their eyes and lungs. 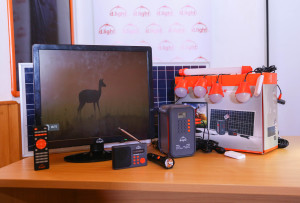 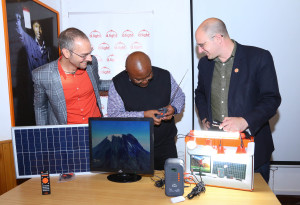 From the left Sam Goldman Chief product officer and founder looks on as Jacob Okoth Managing Director for Africa at d.light demonstrates the product to Ned Tozun CEO and founder of d.light.

d.light co-founder and global Chief Executive Officer Ned Tozun said the world may be going green, but it is also important to ensure that everyone is on board in the journey.

“Solar energy has been notorious for being costly, especially in the developing world, and this is why d.light has always been focused on providing products that are both affordable and reliable. Many families that are just a few meters from the grid still cannot afford a power connection. But they don’t have to live in darkness until the day they raise enough money,” he said.

d.light is the fastest scaling Pay-as-you-Go solar home system brand in the world, with up to 800 new installations per day around the world.

Beyond the direct relief to the consumer pocket, d.light solar kits have also significantly helped users avoid health issues related to the use of kerosene. Fumes from kerosene lamps are known to impair lung function and increase respiratory disease, cancer, eye problems among other health issues.

“When this is removed from the home environment, families see a reduction in the health risks associated with kerosene exposure, including skin rashes and cancers linked to kerosene contact,” noted Mr Tozun.

d.light is a for-profit global social impact enterprise focused on improving the lives of the two billion people in the developing world who live without access to reliable energy. d.light designs, manufactures and distributes the highest quality, affordable solar energy and lighting solutions for households and small businesses. d.light products transform the way people all over the world use and pay for home solar power. Our goal is to impact the lives of 100 million people with our solar lights and home solutions by 2020. As of 2017, d.light has impacted over 75 million people worldwide in over 60 countries. For more information please visit www.dlight.com. Follow us on Twitter @dlightdesign, on Facebook or LinkedIn.