Press Release – New York NY — New York Edge — one of the metropolitan region’s largest providers of afterschool programs — recently appointed Laurie Erlandson and Rashid Silvera to its Board of Directors.

As members of organization’s Board of Directors, Ms. Erlandson’s and Mr. Silveras’ roles will include working with the Development Committee as well as Budget and Finance.

“I’m thrilled to join New York Edge – an organization that is at the forefront of afterschool programming and educational innovation.” said Laurie Erlandson. “As its newest board member, I look forward to helping New York Edge bridge the gap for under-resourced students, so that we can build a more equitable educational environment for children in New York City.”

“It is an honor to join New York Edge as it continues implementing groundbreaking afterschool programs for the youth of New York City,” said Rashid Silvera. “I look forward to joining the fight to tackle educational inequality and bring fairness to New York City students.”

Ms. Erlandson – a former CPA – worked as a community volunteer and philanthropist for the past 25 years. She currently works as a business development advisory with luxury fashion brand, Isoude and serves on the boards of a wide range of non-profit organizations. 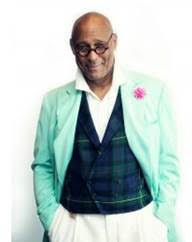 Mr. Silvera was a former history teacher and has an Ed.M from The Harvard Graduate School of Education as well as a M.T.S. degree from The Harvard Divinity School. He was a member of the Scarsdale High School History Department for 36 years and has worked as a fashion model for over three decades and has appeared on the cover of GQ, Essence and Code magazines. Mr. Silvera was also the first African American male to model for a Polo Ralph Lauren advertisement campaign.

New York Edge provides school-based afterschool programs designed to meet the needs and goals of under-resourced schools through customized, curriculum-based programming. Through rigorous, innovative programs such as High School Today, College Tomorrow and a range of other programs — including but not limited to chess club, fencing, robotics and dance — New York Edge expands beyond the traditional afterschool lane, acting as a springboard to life beyond high school.

New York Edge, formerly known as the Sports & Arts in Schools Foundation (SASF), is a non-profit organization and one of the largest providers of school-based afterschool programs in New York City and the metropolitan region. With more than 36,000 students from over 210 programs in grades K-12, the organization provides under-resourced students with year-round programs to give them the edge needed to succeed. www.newyorkedge.org.